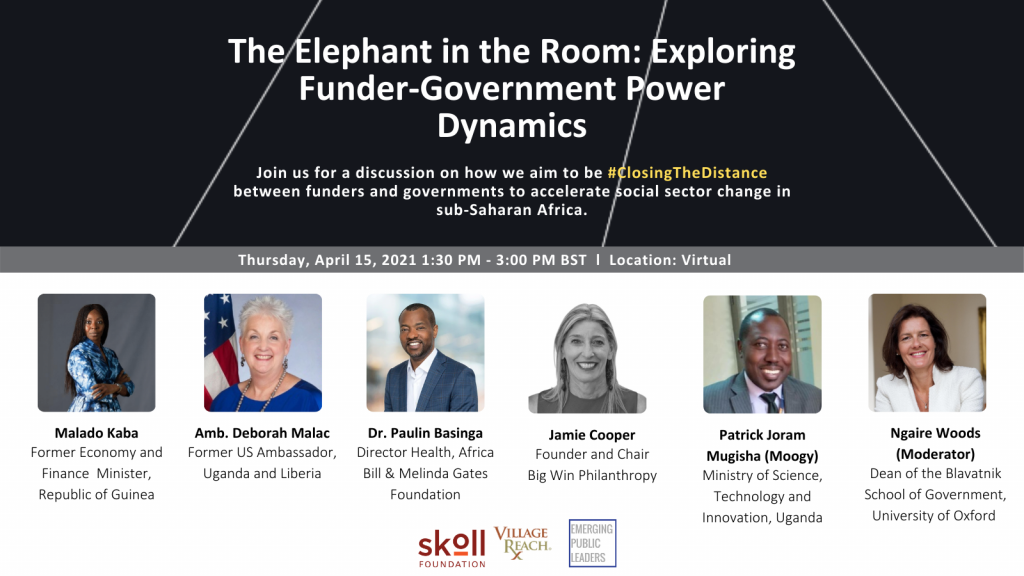 VillageReach and Emerging Public Leaders co-hosted a session at this year’s Skoll World Forum entitled “The Elephant in the Room: Exploring the Funder-Government Power Dynamics.”  The session highlighted some of the issues that inhibit shared power and identified tangible examples to help close the distance between opposing systems of funders and governments, particularly in sub-Saharan Africa.  Several panelists agreed to answer additional questions from audience members that weren’t able to be covered during the session.  (Watch the full session on Youtube and read the Devex article for context and speakers.)

How do we close the distance between the different sides’ (donor/national government) expectations around the time needed to achieve change?  Often donors’ expectations are far too short in terms of timeframes to achieve change.  What does the government need donors to understand better around the pace of change in their country in order to create more realistic partnerships to truly bring about the desired change? (Mark Guy, GHR Foundation)

Ambassador Deborah Malac: There will always be a tension over expected time frames for change to take hold, but interestingly, it is not always the donors who expect change to happen more quickly; sometimes the host governments are eager to see things happen quickly. The solution, as for so many of the issues that are part of this discussion is taking time to understand the local context and conditions, frank conversations from the outset of designing a program, transparency throughout implementation and flexibility to adjust time horizons as needs dictate.

Commissioner Patrick Joram Mugisha (Moogy): It’s the lack of transparency by the donor/funder and lack of empathy to be able to truly appreciate the magnitude of the problem. Sometimes, when governments are working with intermediary parties, “brokers” to the actual funders, such problems are bound to happen. Let the funder seek to build local capacity as well as a priority in order to promote ease of ownership. Half-baked solutions are inevitable if the end beneficiary is not central to the project.

Jamie Cooper: I agree with Deb that the pace works both ways.  Leaders often feel exceptional urgency as they are on short political cycles at which point their success or failure will be publicly judged, while donors often have very specific internal approval processes.  We also must realize though that “it is people who always get you over the line.”  Any major intervention requires not just technical execution but requires buy-in of colleagues, communities and service providers.  The best way in my experience is to agree a clear and tangible definition of success and then progress through a series of key milestones which imbed progress (agreed monitoring dashboard; training of front line workers; budget commitments…). As each milestone is reached both parties recommit to the next stage recognizing that adaptability and good communications will be needed throughout the effort to learn and course correct.

Are there ways to work with governments where both the donor and government are held accountable for the outcomes? (Sasha Zoueva, J&J)

Ambassador Deborah Malac: Accountability is critical for all sides. There must be mechanisms in place that require funders to report on what they are doing and what is working and what isn’t. This reporting should be not just to the government partners but to the communities and public that are being served. These mechanisms need to be developed and instituted from the beginning of a project.  A requirement for such accounting should not be viewed as punitive, but rather a necessary part of the process to have impact and to determine whether something should be taken to scale. Governments must demand such accountability in a reasonable manner and donors should be willing to provide it and not view the requirements as necessarily an effort to “control” them. It is a delicate balance but comes down to understanding the local environment and dynamics.

Commissioner Patrick Joram Mugisha (Moogy): Very good observation. The donor community will set strict code of conduct on how governments should account for the resources as well as results required. All funders have that “rule book.” Surprisingly, I don’t think we have a code of conduct or standards that govern how funders should behave or conduct themselves. The bad practices must be documented and allow governments to make wise choices on which funder to engage in the future. In summary we need standards or code of practice.

Jamie Cooper: I agree with Moogy — this is a really astute observation by Sasha.  Ultimately the key to change will be governments standing up to and actively aligning funders with their priorities.  In the meantime, we all have an obligation to call out behavior and chatter that diminishes governments from delivering on their agenda.

Could there be a more systematic way of understanding government priorities and needs and matching them with potential donors? (Cathy Presland, Consultant, former economist and policy advisor in the UK)

Ambassador Deborah Malac:  Local context matters, of course, as different governments have different capacities and outlooks. That said, most governments have national development plans, often highly differentiated among sectors.  These plans identify sectoral priorities and are publicly available, but often donors don’t necessarily bother to understand those plans, they enter with their own ideas of what the priorities should be.  The answer lies in greater coordination and transparency. Donors need to share with each other and with the host government areas in which they can provide assistance that fit within the government’s priorities. Too often, coordination is largely cosmetic, and host governments are concerned they may lose funds if they press too hard.

Commissioner Patrick Joram Mugisha (Moogy): Government -funder/donor relationship should be participatory and largely transparent for it to yield the intended goals. No donor approaches any government without any motive and well calculated intention. What is in the detail matters. Governments can set their own priorities but equally the donor should do the same. At the midpoint is where each reaches a point of compromise having appreciated each other’s position.

Ambassador Deborah Malac:  National plans and funding through or in support of national budgets/systems is important especially when thinking about scale.  That said, top down programs cannot be successful if they bypass local governments and leaders who are closer to the problems their communities face.  Unfortunately, the local governments are quite often under-resourced, but the answer is not to bypass them, but to help capacitate them so they can play an impactful role.

Commissioner Patrick Joram Mugisha (Moogy): Decentralization is perceived as one of the key reforms that most governments in the global south have adopted. That tried to bring the power closer to the people. However, the local governments are not islands and cannot make some decisions in isolation of the central government. An inclusive approach is the best option and with local government leaders well represented it ensures ease of implementation and continuity.

I am curious to hear the panelists’ (especially those working in government) thoughts on how to improve the government’s capacity/leadership in this on-going negotiation with donors, so that they can drive the best outcomes for them and their people? (Avnish Gungadurdoss, Instiglio)

We were proud to partner for this session with Emerging Public Leaders, an organization that champions the role of government in scaling up development solutions. Having the right people in government to improve service delivery is at the heart of people-first development. Change, especially on global intractable problems, requires networks of people working across institutions and across borders.  We are thrilled to work alongside Emerging Public Leaders to build those networks by investing in civil servants, along with other Learning Network partners such as Spark Health Africa and Africa Health Business.

Join the Learning Network and visit the VillageReach website for additional resources and details regarding scaling with government.