Remembering The Joy of Paulin Kaza 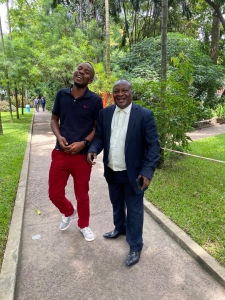 One of VillageReach’s employees, Paulin Kaza, had his young life tragically cut short in a car accident on June 25, 2020. Paulin has been VillageReach’s provincial coordinator in Tanganikya, a Southeast province of DRC, since he started with the organization in December 2018.

Paulin made those around him better — all who knew Paulin were buoyed by his support and moved by his joyful spirit.  Paulin was passionate making sure all children had access to health care, which was part of what motivated him and made him proud of his work at VillageReach.  He was well-respected by his colleagues, the provincial health leadership and partners, and known for solving problems.

Freddy Nkosi, DRC country director, is deeply saddened to lose a friend and experienced colleague who loved to do what he was best at: ensuring that no one is left behind when it comes to receiving health products and services. Freddy says, “We lost a very humble colleague who had a good relationship with everyone. We know that the best way to honor Paulin’s memory is to continue to strive to reach under-served communities in Tanganyika province. We hope to make him proud.”

Emily Bancroft, VillageReach president, said Paulin is one of the most thoughtful, kind-hearted, and sincere people that you will ever meet. Reflecting on her time spent with Paulin in February she said, “it was so clear how much he cared about making sure that he was supporting and lifting up others in the organization. He brought joy and thoughtfulness to the team.”   Paulin leaves behind his wife Nesthel, and young children Pawell, Bryan and Carmen.  He has been reunited with his 17-month old daughter Benedicte who passed in January 2020.

VillageReach staff have started a Gofundme fundraiser to support Paulin’s family and put together this brief tribute as we mourn the loss of a beloved friend and colleague: