The Changemaker Behind CCPF 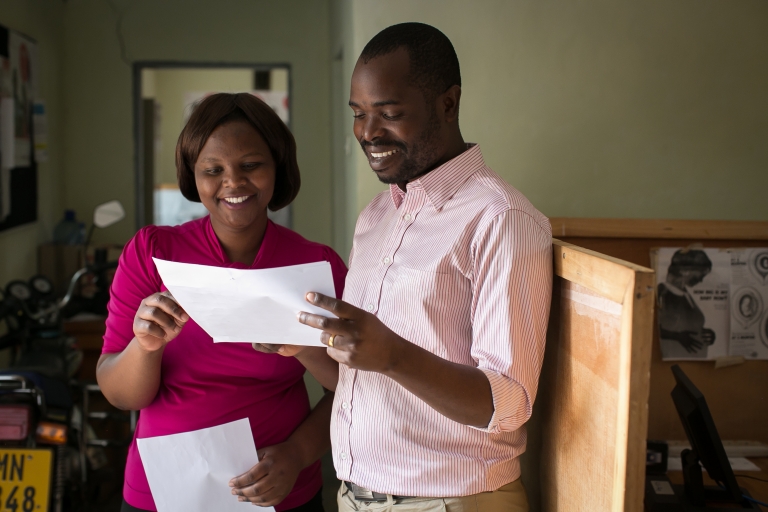 Patience Tchongwe always knew she would be ready to answer the call when it came to public service. When she joined Malawi’s Chipatala cha pa Foni (CCPF), or health center by phone in Chichewa, her desire to make a difference was realized.

In 2015, Tchongwe became a part of the hotline as a nurse midwife specializing in nutrition and food science. At that time, CCPF was only operating in two districts and with three volunteers behind the phones offering advice about maternal and child health. But even in its early stages, the Ministry of Health and Population (MoHP) and Tchongwe’s team could see the value the hotline was bringing to Malawians.

“We were changing lives, and the minister of health saw that. He decided to hire more nurses with the proper qualifications,” Tchongwe said.

From then on, Tchongwe would spend long hours and late nights developing the critical health information and the necessary tools for her hotline workers so that they could properly inform callers and bring them the health care they deserved. Her hard work paid off. She became a key liaison between the MoHP and VillageReach as CCPF transformed into a nationwide offering with an average of 3,000 calls per month.

“CCPF went from maternal health advice to covering questions about all health topics,” Tchongwe said. Now standard health areas – including nutrition, water, sanitation and hygiene, infectious diseases, and sexual and reproduction health for young people – can be discussed with Malawians.

But through the program’s expansion and success, Patience never forgot CCPF’s initial roots as a resource for mothers and their children’s health. As the senior hotline supervisor, she worked diligently to talk with expectant mothers and leave messages for them on what to expect during their pregnancy and how to practice proper prenatal care. She wanted, more than anything, for women to understand the value and life-saving capabilities of having their child in a health facility.

In 2018, Tchongwe began offering advice to Ellena from Chibwana, who was expecting and had reached out to CCPF for their expertise. Like many women in her village, Ellena had her first two children at home, but with her third child on the way she wanted to heed the advice of a community health worker and take advantage of the hotline.

“We predicted her due date for her, so she would know when would be the best time to go to the health center for the baby’s delivery, which was important for her since the center was 14 kilometers away from where she lived,” Tchongwe relayed.

Thanks to the hotline, Ellena became the first woman to give birth in the Kwitanda Health Center rather than at home – a milestone for mothers in Ellena’s remote community.

The CCPF team had also projected Ellena’s due date perfectly, with her daughter Eliza born just one day before the hotline’s estimation.

Tchongwe saw the health care progress she had dreamed of come to life. Women were gaining health care knowledge and utilizing its transformative power for themselves and their children. The impact of her work had reached new heights, and there was no going back, only forward.

Several weeks after the birth of Eliza, Tchongwe journeyed to Ellena’s village to visit the newborn child and ask Ellena if she would encourage others in her community to use CCPF.

“She volunteered to be an advocate for CCPF,” Tchongwe stated with enthusiasm. “We also kept sending her messages and she continued to go to the center for her baby’s wellness visits. Other mothers will be calling CCPF and coming to the center now to deliver their babies because of her story.”

Incredible CCPF experiences like these are becoming the norm, and because of this, Tchongwe was recognized for her dedication and meticulous work.

In 2020, the State President of Malawi presented Tchongwe and VillageReach Country Director Dr. Alinafe Kasiya with a prominent award recognizing CCPF as a Transformative Initiative for Malawi.

The Malawi government has complete confidence in CCPF’s power to bring health care information to its communities. In March, Malawi’s MoHP completely took over operations for the health hotline. Twenty new hotline staff members received their first paycheck, which is demonstrative of their commitment to CCPF.

As she reflects back on the last five years, Tchongwe said, “there’s nothing better than seeing CCPF give Malawians the ability to make informed decisions about their health and greater autonomy over their future.”

“We’ve empowered Malawians like Ellena to take control of their health and imparted them with the knowledge they need, bringing about a great change in our public health care. Hospitals are even telling us how informed the CCPF people are and how they are asking for services.”

Changemakers like Patience Tchongwe are transforming health care for everyone.

Patience is just one of thousands of workers making a difference in health care delivery – support efforts like hers by joining our ChangeMaker Club today. For $20 or more a month, you can be a part of our mission to ensure everyone has the proper health care needed to thrive, or consider making a one-time gift today.