Scaling mHealth in Malawi – Something to Celebrate

CCPF is an mHealth innovation developed and implemented by VillageReach and its partners in Malawi. CCPF was introduced to parts of Nkhotakota district in 2013 with support from Concern Worldwide Malawi. The success of CCPF in these select areas led Concern Worldwide Malawi and VillageReach to launch the services district-wide in Nkhotakota. This blog from VillageReach M&E Officer, Robert Saiti, describes the launch event that took place on March 12th. The expansion of CCPF means 65,000 more women and caregivers of young children will now have access to the service.

On 12th March 2015, Concern World Wide launched CCPF to the remaining northern part of Nkhotakota district. We can now say CCPF is in all six Traditional Authorities of Nkhotakota District. It was a great event where a number of government, NGO and political personnel witnessed the event. More than 1,500 people came from the surrounding communities to get information about CCPF. The guest of honor at the event was Minister of Health Hon. Jean Kalilani who commended CCPF in a speech which included a number of mobile services that are new in the country.

More than 1,500 people came from the surrounding communities to get information about CCPF. 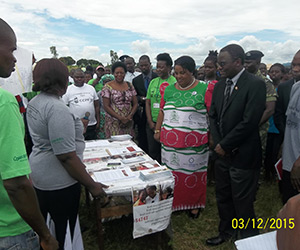 Novice Gauti and Robert Saiti on VillageReach/Hotline table giving an overview of CCPF to the group which was led by CWW Health and Nutrition Project Manager Lillian Kamowa, the Minister of Health and the Chief Secretary for health.

The Chief Secretary for Health, Dr. Charles Mwansambo, the DHO for Nkhotakota district, members of Parliament for the area and many others were also there to witness the launch. The event included a number of performances including Nkhotakota Health Education band, well-known musician Charley Patache and a number of traditional dances including Gule wamkulu. The Chief Secretary expressed his interest to visit VillageReach and the hotline.

Malawi Country Director for Concern Worldwide Gwyneth Cotes, addressed the attendees, giving background information on CCPF and sharing the interest that Concern Worldwide has in expanding the service to the rest of Nkhotakota district.