Change does not come easily, particularly to systems that have been operating in a specific way for a long time and where many people have a stake in the decision making. But sometimes it becomes clear that change is necessary to improve how things operate. 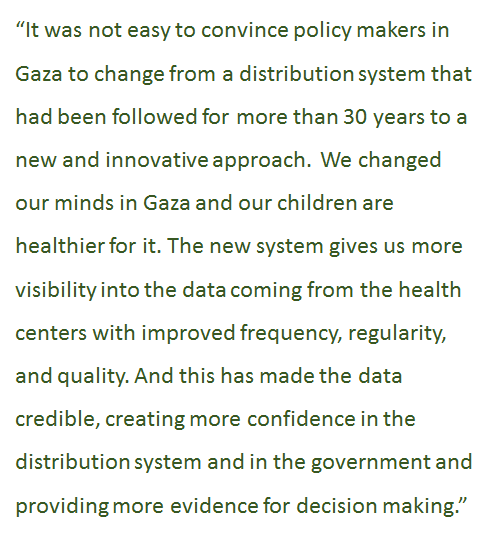 As Medical Chief in Gaza Province in Mozambique, I have seen this first hand with a distribution system in great need of transformation to increase accessibility of vaccines for children.

Up until a few years ago, our vaccine distribution system followed the government administrative tiers, a system widely adopted by countries across our region. Here at the provincial level, we received the vaccines from the national medical stores and delivered the appropriate amount to the 12 district levels. From there, each district was responsible for delivering the vaccines to the health centers, about 10 in each district with some that are extremely isolated and difficult to get to.

On paper this system looks great—very systematic and methodical. Reality is a different matter at the last mile of delivery. Following administrative tiers requires several vehicles at the provincial level and a vehicle at each district, which were often not available or were broken down. Or the funds were not available at the district level to purchase fuel or to pay the costs of delivery to the health centers. Many times, the responsibility fell on the health workers from the health centers to arrange transport to the district to pick up the vaccines. This required a day away from the health center (and away from patients who actually need care), arranging available public transport that is infrequent and unreliable, and the health worker paying for the transport out of her own pocket if she had money available.

The results of this multi-tiered, ad hoc system were lost opportunity for care, frequent stock-outs of vaccines at the health centers, unreliable and infrequent data, and a system that depended on the willingness of a health worker to spend her own money to make sure she has supplies available to do her job.

In 2009, with technical support from VillageReach, we introduced the Dedicated Logistics System (DLS) for our vaccine distribution. The DLS is an informed push system which involves level jumping, task shifting, dedicated personnel, and improved data management. Essentially, instead of following the administrative tiers, we have divided the province into two delivery zones with a dedicated field coordinator and a vehicle for each zone. Each month, the field coordinator follows a transport loop to each health center to deliver the appropriate quantity of vaccines based on actual consumption during the month before, collects data on vaccine utilization and confirms its quality, checks the refrigerator to ensure it is functioning correctly, and provides supportive supervision to health workers. The data is entered into a new information management system that enables improved data visibility with key information on system performance for decision-makers.

The benefits have been phenomenal. I have seen more improvements in distribution and vaccine availability in the past few years than in the three years before that. Stock-outs of vaccines have dropped from above 15% to around 5%. This system gives us more visibility into the data coming from the health centers with improved frequency, regularity, and quality. And this has made the data credible, creating more confidence in the distribution system and in the government and providing more evidence for decision making.

Now we have a cost-share approach, where we cover part of the costs and VillageReach, with support from the Bill & Melinda Gates Foundation, covers the other part. We are so committed to this system that we made sure to include the total costs of program implementation in our proposed plan for the state budget next year, which will eventually lead to us sustaining the program ourselves.

It was not easy to convince policy makers in Gaza to change from a system that had been followed for more than 30 years to a new and innovative approach. I admit that initially there was some resistance, but, with time, good sense prevailed and with it came a readiness for higher quality of care to the community, particularly in rural areas at the last mile of service delivery.

The evidence is there to justify the change. We have increased vaccine coverage and healthier children.

We changed our minds in Gaza and changed our distribution system. And our children are healthier for it.

Bertur Alface, Medical Chief of Gaza Province in Mozambique,  is responsible for the technical areas across the health sector including advocating for improved system implementation.