Understanding the Barriers to Maternal and Child Health in Kwitanda

Maternal and infant health outcomes are worse in Balaka district (where Kwitanda resides) than Malawi overall in most important indicators. For example, almost a third of women in Balaka give birth at home while, nationally, less than a quarter do. Given the high rate of home birth it’s not surprising that only 63% of Balaka women have a skilled attendant present at their birth (versus 79% nationally). Additionally, the postnatal period is crucial for both the health of the mother and infant, but only about a third of Balaka women receive a check-up within the first two days of giving birth compared to 43% of women nationally. Luckily, over 90% of women in both Balaka and receive some prenatal visits before giving birth; nonetheless, the proportion of Balaka women who receive prenatal care is slightly less than the national average. 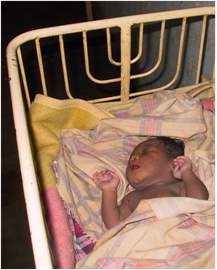 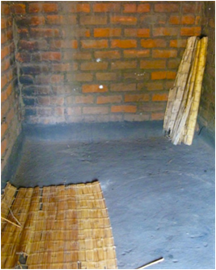 In Malawi, many newborns like the one pictured here (left) are delivered by traditional birth attendants in rooms that often look similar to the one above (right). While some mothers prefer the comprehensive care provided by TBAs, others are wary of their ability to handle obstetric complications.

In order to design a program aimed at improving maternal and neonatal health outcomes for the Kwitanda community, it is essential to have an understanding of the unique needs of the community. While the Balaka-level information is illuminating, it doesn’t tell us what’s happening in Kwitanda specifically and, more importantly, it doesn’t tell us why. So we conducted three focus groups in Kwitanda with the following groups: women who recently gave birth at a health center, women who recently gave birth outside a health facility, and community health workers as well as several key informant interviews. Here are some of our most important results:

Some women prefer to give birth with a traditional birth attendant rather than in a hospital. We expected cost and transportation to be barriers preventing women from giving birth in a health facility – and they were (several women gave birth on the way to the hospital since they could not arrive fast enough). But some women also prefer to giver birth with a traditional birth attendant (TBA) rather than in the hospital. There are familial and cultural traditions that encourage women to utilize TBAs as well as the fact that TBAs are often located closer to the women’s homes. But in addition, women cite fears about harsh treatment from hospital nurses as a major reason they’d prefer to give birth with a TBA. First time moms in particular are drawn to the support and one-on-one attention they can receive if giving birth with a TBA. Even some mothers who have delivered a previous child at a hospital say they’d rather deliver their next child with a TBA.

Women recognize that traditional birth attendants are not prepared for every complication. Despite some preference to give birth with TBAs, many women recognize that TBAs are often ill-prepared for complications during labor and delivery and that there are advantages to delivering at a hospital. One woman, who experienced complications while giving birth at a hospital, said she believes she might have died had she given birth with a TBA instead. Women also pointed to the fact that if you give birth in a hospital, you have access to crucial post-natal care not available with a TBA.

Not all women know when to get postnatal care. Women had heard mix messages about when to visit a health center for postnatal care: some said it was 6 weeks after giving birth; others said they were told to bring their child after one week for immunizations; and some knew that if they gave birth at home or on the way to the hospital they should go for a check-up the next day. In addition, women pointed out that the getting to a health center or hospital for a check-up right after giving birth wasn’t always easy because of the difficulty of walking or finding transport while simultaneously recovering from labor and delivery.

Women face difficult decisions when deciding where to give birth. In addition to major cost and transportation barriers, women have to weigh family, cultural and emotional factors into their decision-making. While women tend to have more positive experiences accessing prenatal care in a health facility (compared to labor and delivery) women would still prefer a model that allows them to receive care from a community health care worker closer to home. The Health Systems Group at VillageReach is processing all the information we’ve gathered and actively discussing possible interventions and solutions. We’re excited to update you soon!