Patuma Richard’s family is  a mother of five  who lives in Kazondo Village in Balaka, a district in southern Malawi. 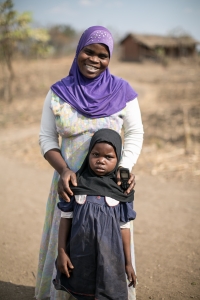 Patuma and her daughter Priscilla near their home in Kazondo Village, Malawi.

Until recently, their 5-year-old daughter Pricilla suffered from Epistaxis, frequent nose bleeds exacerbated by hot weather and malnutrition.  Patuma’s family does not have transportation, and the nearest health facility is more than an hour’s journey away on foot.  Patuma and Pricilla have made this journey several times in the past few months. A few months ago, when Priscilla began to vomit blood  they set out once again on the long trip to the hospital. When they arrived, the medication used to treat the condition was stocked out (a common occurrence), and instead she was given painkillers which did not help her condition. Frustrated, Patuma and Pricilla began the long journey back home to their village.

Fortunately, Patuma found out about CCPF. When Patuma called, a hotline worker was able to advise her on several techniques to alleviate Pricilla’s nose bleeds such as a cold compress on the forehead, staying out of the sun for long periods of time, and practicing good nutrition. After several weeks, Patuma called the hotline again – this time to thank them for helping her daughter, noting a marked improvement in Pricilla’s condition.

“CCPF is a very good service, a lot of people are being helped and they don’t have to travel to the hospital anymore, which is very good,” said Patuma. 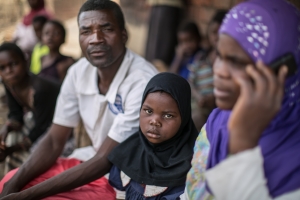 Her husband also expressed his satisfaction with the service. “Sometimes, when we go to the hospital, we don’t get all the information we need, and when we don’t understand what to do, we can now call CCPF to get answers,” he says.

For many people in high-income countries, access to healthcare means a short drive, a quick phone call, or a few minutes search online – all things that are easily taken for granted when they are so accessible.

With CCPF, more than 5 million people in Malawi now have access to health information over the phone, bridging a critical gap in access for remote communities. Sometimes, the call is routine – an estimated birth date for an expectant mother or recommended treatments for common conditions like Pricilla’s.  Other times, CCPF is a critical, life-saving link to the health system – ensuring that the caller understands the potential severity of their symptoms and helping them access the care and services they need.