SEATTLE, Washington, November 5, 2015 – Airtel, Africa’s largest mobile carrier and global health NGO VillageReach announced a new partnership to expand and enhance mHealth services in Malawi. The new service, called Airtel Chipatala Cha Pa Foni represents a merger between Airtel Malawi’s existing Dial-a-Doctor service and the Malawi-based Chipatala Cha Pa Foni (CCPF) or “Health Center by Phone.”  CCPF combines a staffed health hotline with a mobile message service providing regular text or voice messages on reproductive, maternal, and newborn health topics tailored to the client’s week of pregnancy or a child’s age. In the coming year, CCPF will also expand to include targeted nutrition content. Airtel Malawi’s Dial-A-Doctor enables callers to use a simple shortcode to directly reach a physician 24 hours a day about any health issue. In this integrated service, a user calling the Dial-a-Doctor or CCPF shortcode will be connected to a hotline worker at the CCPF call center for triage where the hotline worker will have the option to connect appropriate cases directly to an on-call Dial-a-Doctor physician.

The merger will leverage Airtel Malawi’s customer base to greatly expand the reach of these services, enabling more people in Malawi to access a diverse range of health information and services over the phone including first aid, common medical problems, health conditions, proper use of medication, counseling, home remedies and natural cures. The phone-based counsel is provided by a team of trained professional medical personnel including medical doctors, nurses and clinicians all of whom have between 8 to 24 years’ experience.

“The initiative falls under Airtel Africa’s mobile health (mHealth) portfolio, which has an overarching mandate to bridge the information gap about healthcare issues, raise awareness, enhance understanding about these issues and educate customers on how to lead a healthy lifestyle both in Malawi and across the continent,” said Acting Managing Director for Airtel Malawi, Charles Kamoto.

“Airtel has always been committed to making a lasting and positive impact on the lives of every Malawian, and Chipatala cha pa Foni initiative reinforces this commitment to the community,” added Kamoto.

CCPF was originally developed by the international NGO Concern Worldwide. In partnership with Concern Worldwide Malawi, VillageReach is working to expand CCPF to Mchinji District to pilot the merged service. As part of the merger, Airtel will zero-rate airtime associated with calls to the hotline, absorbing the cost that non-profit VillageReach and its donors have historically had to fund. This contribution is significant as it demonstrates a working model for private sector engagement and public health systems in low- and middle income countries.

“This partnership represents a significant achievement in reducing the barriers to scale successful mHealth programs in low- and middle income countries. It’s a pioneering example of the impact the private sector can have working with civil society to improve public health – be it through an NGO, or directly with the government, creating a sustainable model that other mHealth programs seek to replicate globally,” says Jessica Crawford, Director, Health Systems Group for VillageReach.

The Ministry of Health has already expressed interest in expanding services like CCPF nationally. The new combined service will be evaluated after one year with the expectation of informing a larger, national scale of the program in partnership with the Malawi Ministry of Health.

Malawi has one of the highest rates of maternal, child, and infant mortality in the world. Mortality rates exceed sub-Saharan Africa averages by more than 50%. Many of the global barriers to maternal and child health are exacerbated in Malawi where 85% of individuals are poor and live in rural areas and there are severe shortages of health workers with only 2 physicians and 38 nurses available per 100,000 people. CCPF addresses these challenges by extending the reach of healthcare to underserved communities, improving access to health information and services, and decreasing unnecessary visits to health facilities.

Bharti Airtel Limited is a leading global telecommunications company with operations in 20 countries across Asia and Africa. Headquartered in New Delhi, India, the company ranks amongst the top 3 mobile service providers globally in terms of subscribers. In India, the company’s product offerings include 2G, 3G and 4G wireless services, mobile commerce, fixed line services, high speed DSL broadband, IPTV, DTH, enterprise services including national & international long distance services to carriers. In the rest of the geographies, it offers 2G, 3G and 4G wireless services and mobile commerce. Bharti Airtel had over 335 million customers across its operations at the end of August 2015. To know more please visit, www.airtel.com

VillageReach is a non-profit global health innovator that develops, tests, implements and scales new solutions to critical health system challenges in low-resource environments, with an emphasis on strengthening the “last mile” of healthcare delivery. VillageReach combines expertise across public health, technology, and business to bring life-saving innovation – new systems, programs and technologies – to scale and sustainability in the world’s most underserved communities.

For nearly 50 years, Concern Worldwide has worked with the world’s poorest people to transform their lives.  Concern Worldwide reaches 7.4 million people in 20 countries, working in emergency response, health and nutrition, climate resilience and more.  Innovations for Maternal, Newborn and Child Health, an initiative of Concern Worldwide U.S., pilots creative solutions for improving the survival and health of women, babies and children.  Innovations is supported by a grant of the Bill & Melinda Gates Foundation.  Chipatala Cha Pa Foni was developed as a pilot within Concern’s Innovations program. 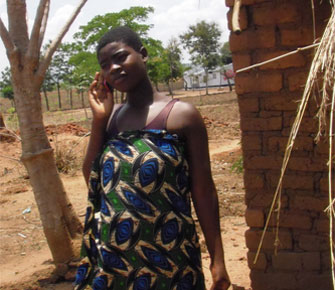