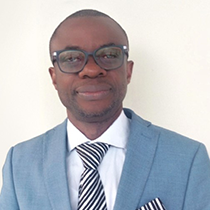 Freddy Nkosi is the Country Director for VillageReach in the Democratic Republic of Congo (DRC). He plays a critical role in managing the relationship between VillageReach, the government of DRC, non-governmental agencies (NGOs) and donor partners. He also provides leadership and oversight for all program strategies and implementations in the country.

One of the key programs that Freddy oversees in DRC is the partnership with national and provincial government officials to implement the Next Generation Supply Chain Initiative (in French, it is known as Nouvelle Génération des Chaînes d’Approvisionnement, or NGCA) to create a more efficient, effective supply chain. The initiative was launched in March 2017 with an initial focus in Equateur Province – a logistically challenging region in northwestern DRC. Today, NGCA reaches 56 districts across five provinces across the country. NGCA involves direct distribution of vaccines (from the provincial warehouse to the health facility); revision of distribution frequency; data collection during the distribution; supportive supervision and on-site training; and empowering supply chain champions.

Freddy has over 15 years of working in the development sector in areas such as health, governance, economic development, education and human rights.  In a previous role with African Monitor, Freddy worked in South Africa and coordinated large-scale programs in over 10 African countries.  He is a nurse and has a Master of Business Administration (MBA).