Belinda Chimwala is a 30 year old mother of four who lives in Madyeratu village in southern Malawi. Belinda lives 5 kilometers away from the nearest hospital with maternity and uses a bicycle to travel there. Belinda and her husband had three children when she experienced a stillbirth. After the stillbirth, Belinda was very disappointed and lost hope of having another child again. She was able to get pregnant again but was worried throughout the pregnancy. 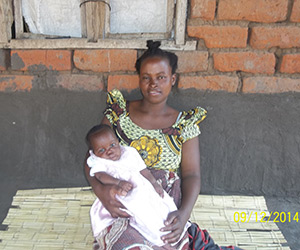 Belinda and her daughter

Belinda heard about CCPF, and was relieved to know that this service existed. She called CCPF and was registered for the tips and reminders for pregnant mothers. In addition, the hotline workers advised Belinda to get plenty of rest, healthy foods to eat during pregnancy, to sleep using the left side, and avoid overworking. When she was told her due date, she was shocked and excited. Even though this was her fifth pregnancy, this was the first time she had been told what her due date was. She was very pleased with the services provided by CCPF and the information she received from tips and reminders that helped her to monitor her pregnancy. With this information, Belinda and her family were able to prepare for the baby’s delivery by developing a birth plan and saving money. In addition, Belinda and her husband were so pleased with CCPF that her husband bought her a phone so that she could always have access to CCPF. Knowledge is power and with the information and advice she had from CCPF about her due date, Belinda was able to prepare for the birth. When the labor started, Belinda had been told what the symptoms were and went to the health center for evaluation. Once there, however, they told her to go home saying that she was not yet in labor. Belinda then called CCPF for advice as the labor pains were continuing. During the call, she was advised by the hotline worker to return to the hospital as she was exhibiting signs of labor. Upon returning, Belinda insisted she was in labor and was allowed to stay. Five hours later, she gave birth to a healthy newborn. Belinda credits the advice given to her by CCPF as a valuable tool which helped prevent her from giving birth at home, or on the way to the facility. Now, Belinda’s child is also registered for tips and reminders, and she received weekly messages relating to her baby’s care and development. Belinda is telling other women in the community about this service and is helping them to get registered for CCPF. In Belinda’s community, women often deliver at home or on the way to the facility because the village is located so far off of the paved roads. With CCPF, women are given the education and information they need to make informed decisions about what to do when labor starts, helping to avoid dangerous deliveries outside of health facilities. Learn More About CCPF