Getting Smart on Drones in Mozambique – UAS4TB Stakeholder Seminar

To transform health care delivery in far-reaching areas of Mozambique, it takes creativity, thinking outside of the box, resilience and strong commitment. It also requires a team approach and a lot of early buy-in. Engaging with a wide variety of stakeholders and being inclusive of a range of voices from the start is paramount to the work that we do at VillageReach, and particularly with a new and evolving technology like drones.

Ministry of Health, Aviation experts, mining companies, cartographers, disaster response teams, defense experts, the U.S. CDC and officials from the Civil Aviation Administration, Ministry of Science and Technology, and VillageReach all came together to discuss the potential for drones in Mozambique, including how UAS4TB, could be a game-changer for the most rural areas within the laboratory sample transportation network.

The Seminar on the use of UAVs in Mozambique was co-hosted by UKAID and the “Instituto Nacional de Saúde” or “National Institute of Health” (INS) through funding from the Frontier Technology Livestreaming programme. The INS, an organization advancing the scientific agenda of the country, and many others engaged in fruitful discussions to explore how Unmanned Aerial Vehicles (UAVs) (widely known as “drones”) can be used to support the healthcare system, and more specifically the specimen referral network for tuberculosis (TB). Diagnosis and treatment of tuberculosis has been a challenge for Mozambique; the country has among the highest incidence of TB coupled with the lowest case-detection rates in the world.

Exploring the potential of UAVs in hard-to-reach areas

The Director-General of INS, Dr. Ilesh Jani, opened the seminar with an exploration of the far-reaching potential of UAVs in Mozambique. He highlighted infrastructure difficulties, lack of resources and the need to increase efficiency for the transport of medicine and samples to and from hard-to-reach areas of Mozambique. His remarks were followed by a series of presentations highlighting examples of how drones are currently used in Mozambique and elsewhere. For example, the National Disaster Management team shared how they have used UAV software to map disaster zones after heavy rains and flooding, including the simulation of strong torrential rains and the possibility to identify disaster zones and evacuation places to create shelters for the affected populations. The Air Force Branch of Mozambique gave an overview of UAV security considerations to protect against the possible violation of private and military air space, and jeopardizing of national security. Mozambique’s civil aviation department guided the audience on the history and procedures for use of UAVs in in Mozambique, including the draft regulations for the country, which is anticipating adopting them in the near future.

VillageReach also presented on the lessons from its past and present drone studies in Malawi. The seminar concluded with sharing of the new UAS4TB project by VillageReach, a pilot study to demonstrate how drones could be used to transport sputum samples from hard-to-reach areas into more central laboratories for testing. The study includes several elements, such as a community perceptions study to assess how communities feel about the technology, a sputum quality study to compare sputum transported by drone to that transported by road, and a use case analysis that would lead to recommendations on best use of UAVs in the sample transportation network.

Limitless questions must still be answered, but the workshop was abuzz with talk about what — and how — they want drones to deliver. VillageReach believes that robust and coordinated seminars like this are necessary to build community and support for the use of drones. Given the participation in this meeting, it is clear that Mozambique is ready to embark on testing the use of drones for public health to benefit the communities of the last mile. 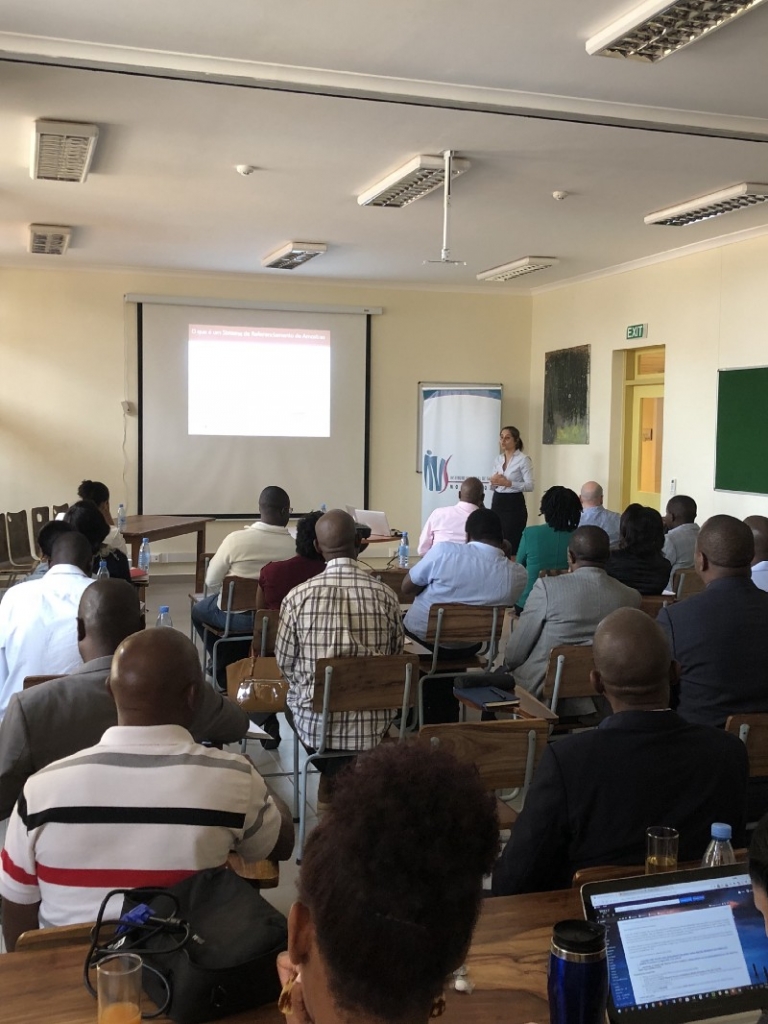 Participants during a session at The Seminar on the use of UAVs in Mozambique.