Impact of Flooding on Storage and Delivery of Vaccines

The Licungo River in the Mocuba district rose to 12 m – 6 meters higher than what is needed to trigger a maximum alert.

As the world welcomed 2015, Mozambicans were faced with destroyed infrastructure, displaced families and dozens of deaths – the result of catastrophic flooding to the central and northern areas of the country.

The intense  floods caused a power outage on the 12th of January, 2015 in the northern region of the country (Niassa, Cabo Delgado and Nampula) and part of the central Zambézia province. The floods destroyed the electrical towers and power lines that carry electricity from the national grid outside of Maputo  to the northern and central zones of the country, the area’s only source of power. As of the date we closed this blog (23 January 2015) Niassa province was still without electrical power, with no estimate on when it will be  restored.

This wide-spread loss of power has seriously threatened the vaccine cold chain.

Vaccine conservation standards indicate that vaccines must be stored between  2ºC and 8ºC in order for them to remain viable as vaccinations.  Most health facilities use freezers to conserve their supply of vaccines and any long-term loss of power can be detrimental to the supply unless swift action is taken to conserve the vaccines. In order to see the on-the-ground impact the blackout is having on the Expanded Program on Vaccination (EPI) and the cold chain, a VillageReach team visited the Lago and Sanga districts of the Niassa province.  We found that the health centers that are currently without power have taken their vaccines to health units with solar powered freezers. Despite this move, the conservation of vaccines is still a concern for local health authorities as the usual immunization activities are not taking place at the typical locations and times due to the changing location of the vaccines. 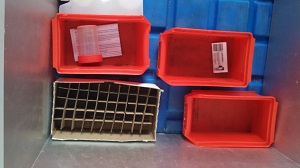 We noted that neither of the two districts had defined alternative strategies for vaccination, while nine of the fixed vaccination stations were dependent on coolers that only could keep vaccines cold for up to seven days. Due to the severity of this particular power outage and no indication of when it will be restored, a seven day cooler is not sufficient to ensure vaccine conservation.

Additionally, overcrowding of freezers is occurring at health facilities that have solar-powered freezers because they are receiving vaccines from multiple facilities. For example, three health centers in the Lago district, including the main health center and the district’s vaccine warehouse, had to transfer their vaccines to the Mululuca Health Center, which is about 40 km from each of the three health centers. The Mululuca Health Center now has to find space to hold all of the vaccines for the entire district.

The natural disaster has unveiled the  concerning reality of current vaccine conservation standards.

Additionally, there is not enough gasoline for vehicles to transport the vaccines from the location where they are being kept to the fixed vaccination spots in the field. This is particularly concerning considering that

the vaccines are now all in one location but cannot be delivered to those who need them.

Furthermore, many facilities without power are depending on coolers powered by batteries to keep vaccines cold. These batteries need to be changed every seven days. Without gasoline and vehicles, getting additional batteries may be impossible and the vaccines are at high risk of spoiling.

A Need for Reflection

Almost every year, floods and severe storms occur in Mozambique and threaten to destroy the country’s infrastructure. Power loss in health facilities is nothing new and almost always occurs during these natural disasters. As of now, the funds that are used to purchase freezers for vaccines only allow for the purchase of electric freezers – solar –powered freezers are not approved for use of funding.  This practice is a topic that needs better reflection and thought, particularly in a location where storms are power losses are so common.

About the Author – Aida Marina Coelho holds a bachelor’s degree in Public Administration and a Masters of Public Health from Curtin University of Technology in Western Australia. Having worked at the Ministry of Education for 10 years in various management capacities, her experience includes coordinating the national program of direct support to schools, implementing the Strategy to Prevent and Combat Alcohol and Drugs, and managing the national expansion of the Geração Biz project focusing on sexual and reproductive health.

Her experience in planning, implementation, monitoring, and supervision for programs focusing on promoting good health and strong coordination with government, NGO, international organization, and donor partners is valuable in her role as VillageReach Mozambique’s Program Officer where she joined in 2011. As Program Officer, she is responsible for monitoring and supervising the Dedicated Logistics System in the various provinces with a focus on implementation planning and technical management.
Learn about the VillageReach Mozambique team
Return to Newsroom