As a partner in Mozambique’s health system, VillageReach is undertaking a study about the shortage of RDTs in the rural health centres. This is the second in a series of updates we expect to provide on the work – see the first post here. The study will conclude this fall.
The study involves gathering and analyzing data that health workers collect as they provide testing services, and using that data to analyze consumption as it informs the test distribution. Data about the use of RDTs is critical to operating a well-functioning supply chain and ensuring that health centers have the right tests at the right time. This data allows planners in the health system to purchase the right quantity of tests and distribute them throughout the health system while minimizing wastage and expiry.
Until now, the national health system in Mozambique has not distributed standardized forms for collecting this data. However, the lower levels in the government recognized the need and value of the data and implemented their own systems. In the first visit made by the study team in January this year, it was found that the data collected was of very poor quality, due to lack of standardized instruments or forms to use for recording data and a lack of training for the health workers. The forms used to collect the data were undergoing numerous changes, which complicates the process of data collection at the service delivery point. 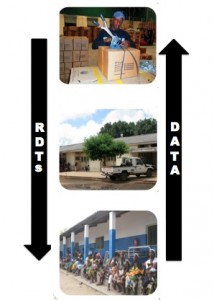 The system for distributing tests and collecting data about tests was designed with the following flow: the RDTs are amassed at a provincial medical store, redistributed to district storage facilities, and then transported to rural health centers. The image on the left represents the ideal.
Last week we visited again and found that key improvements had taken place in the last four months.
1. Systems and processes are in place to collect data about the use of tests. These are being used properly and routinely. This is no small feat in a country so vast and full of infrastructure challenges that can limit access to the health centers.
2. The Logistics Management Information System is installed and in use at the district level. That is a major accomplishment, and one that will improve the distribution and supply of medicines throughout the country.
But this visit revealed another fundamental observation. Despite improvements over the recording and availability of data about test consumption, there continues to be shortages and stock outs of tests in the health centers. Specifically, I observed situations where there were too few RDTs and a number of them had expired before being used. If the data is there to make the system work, then what is happening?
For many cases, we discovered the question can be answered by the following factors:
• A lack of vehicles for transport limits regular distribution of RDTs and medicines to health centers;
• Where there are vehicles available for transport, there is often a lack of fuel;
• Where there are vehicles and fuel, there is a chronic lack of allowances for personnel to carry out the distribution of medicines.
These factors greatly influence the availability of RDTs at the health center level. With delays in distribution, RDTs may expire before they are used, ultimately reducing the quality of service at the health centers. 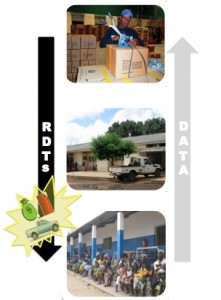 All this ultimately results in poor distribution system of RDTs used in the province and a higher cost of distribution. In addition, the lack of regular distributions results in incomplete and inaccurate data about the health centers being reported back to administration levels within the health system. This image on the right represents what we see in reality.
These factors, all too common occurrences for health systems with limited resources, highlight the importance of improving the quality and capacity of the underlying infrastructure the health centers depend on in order to support so many remote communities.