Arriving at the Last Mile in India’s City Slums … 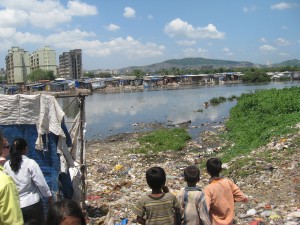 With our focus on last-mile healthcare access for remote rural populations, it may sound like a contradiction to address the pressing challenge of improving access for urban populations.  But in 2010 that’s exactly what we’ll be doing.  In August and September we were in India to look at locations for a new vaccines distribution program, and to facilitate a workshop of local and regional NGOs, UNICEF, the Ministry of Health and Family Welfare (MOHFW), and the corporate sponsor of the program.  One of our site visits included a trip to one of Mumbai’s largest slums, built right on top of the city’s main garbage dump.

The workshop highlighted inadequacies of the cold chain in addressing the government’s immunization goals, critical gaps in energy, communications, and transportation infrastructure that exist for many last mile communities; and that health workers are overburdened due to the scope and scale of their day-to-day work.  Not surprisingly, our experiences in sub-Saharan Africa are addressing these same issues.

How did we get from rural to urban?  As part of the workshop we included discussions on India’s population growth and industrial development that is leaving millions behind in rural communities throughout the country.   The three states of Bihar, Madhya Pradesh and Uttar Pradesh make up over 50% of the country’s estimated 10 million unimmunized children.  That’s the largest unprotected population of any one country on the globe. The great majority of theses states’ children are the very rural poor.   But two of these states also have the highest child mortality rates for urban poor communities in the country, which highlights the correlation between the rural poor and the rapid urbanization of the country, as desperate migrating families look for employment.  Dr. Siddharth Agarwal of the Urban Health Resource Centre, based in Dehli, is a passionate and persuasive advocate for these urban slum communities.

Not unlike remote rural communities, urban slum populations are difficult to reach.  There is weak physical infrastructure, limited reliable health services and poor documentation of the populations.

The plight of India’s city slum dwellers certainly isn’t a new topic … Mumbai’s Dharavi Slum of “Slumdog Millionaire” fame helped ensure that, but that the task of improving last mile healthcare access for the urban underserved is strikingly similar to that of rural communities, certainly may be.