Home >Blog >Uncategorized >Reflections on an Evening with Mrs. Machel
Thoughts from the Last Mile Welcome to the VillageReach Blog

Mrs. Graça Machel, an international leader and advocate who has transformed the lives of women and girls throughout the world, mesmerized global health leaders, members of the Seattle business and philanthropic community, and VillageReach staff and board last night at Seattle’s Museum of History and Industry. 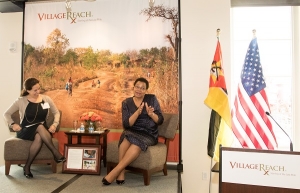 Magda Robert from the Gates Foundation moderates a discussion with Mrs. Machel

Affectionately known as Ma Machel, she returned to Seattle to visit her VillageReach “family” 17 years after her last trip.  It was 1999, on a “Building Bridges” tour with her late husband Nelson Mandela, when the seed for VillageReach was first planted. Many of the people involved in that tour came back together to honor Mrs. Machel, her legacy and connection to VillageReach. She also brought leaders of organizations she founded — Foundation for Community Development and The Graça Machel Trust.

Mrs. Machel inspired us all, reflecting on the influences that have helped shape her life’s work.

At the heart of her work is the right of every child to lead a happy and healthy life. She highlighted the role and impact of the Sustainable Development Goals, calling out, in particular, the continued need to address hunger, health, education and gender equality as the building blocks of human rights.

Throughout her remarks, Mrs. Machel underscored the critical importance of bringing the “the village” into all aspects of sustainable development, to know and intimately understand the communities in which we work, and to ensure their voices are represented.

She reflected on how amplifying voices of the village helped Gavi move a global community, including the pharmaceutical industry, to take action.  Mrs. Machel said it is “only when you combine local knowledge, local systems, and local reach with global knowledge and a global network, will that initiative get rooted and grow.” 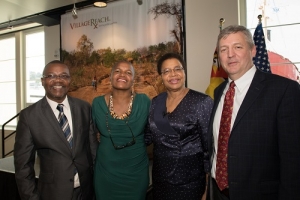 Mrs. Machel further imparted how empathy and a people-first mentality are essential to understanding the reality of the challenges we work to solve.

She said, “statistics have a name, a face, a family context. We have to humanize the face of the excluded.”

Mrs. Machel has spent her life helping to ensure immunization for all, end child marriage, protect children from war, and increase access to education.  Her impact is matched by her humility, however.  While she is a driving force behind global shifts in policy and political will, she was quick to remind us that progress is always through partnership. 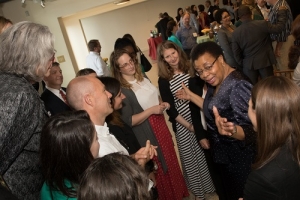 “If we see ourselves as a family rather than individual organizations working in isolation — we’ll make much more progress.”

On behalf of the entire VillageReach team and all those who had the privilege and honor to hear you speak, we thank you, Ma Machel. Your words remind us of our responsibility as global citizens to be the voice of change in our own communities and around the globe.  You inspired us to take action wherever and however we can, as only you could say:

“When challenges in life end up in your lap, there is no way you can do ‘business as usual’ because you understand the responsibility given to you- it is between life for a child and death.”

An Introduction of Graça Machel by Paul Suzman