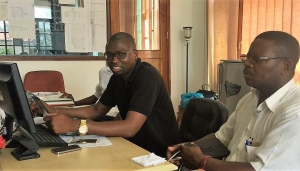 Throughout my trip, I received feedback and suggestions on how to improve SELV and how it has already made an impact in Mozambique.

“SELV will make it easier for me to elaborate reports at the end of each distribution.”

SELV uses the preexisting Ministry of Health forms as the basis for data collection. This means that even the least experienced user feels comfortable filling out the forms. This similarity makes it easier for new users to understand what data is needed in each field. In Maputo City province, however, some of the first-time users were worried that SELV was just another tool collecting the same information. This gave me an opportunity to show how much faster and more efficient SELV is for collecting and analyzing data and providing reports. It’s much easier and faster to export the data – saving the health workers time and energy that they could spend on other important tasks.

“The Health Unit Performance Map on SELV can give me a quick overview of which Health Units need to be prioritized on my next distribution.” 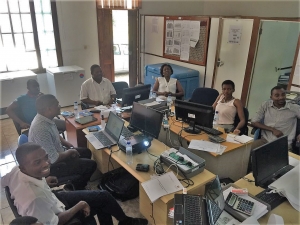 SELV is making a massive impact on the immunization supply chain, as logistics personnel now have visibility into what each health center needs. Using the information collected through SELV, these personnel can determine what tasks they’ll need to complete before arriving at the health center, whether it’s addressing a stockout of key vaccines, or a fridge that’s not working as it should. In Zambezia province, we found that by analyzing the consumption of vaccines through monthly reports logistics personnel were able to decide how many vaccines they should request for the next distribution, thereby lowering the probability of a stockout. With more information, logisticians are able to come up with a plan and be prepared for their distributions, increasing their effectiveness and preventing stockouts and other problems faster.

“I can identify issues just by looking at the data I’m inserting on SELV.”

SELV provides a source of information and data that can be compared to other sources of information on vaccine availability. By looking at these comparisons, it becomes possible to understand the underlying causes of stockouts. In Zambezia province, stockouts were regularly recorded over the last three months due to delays in delivering the needed vaccines. Using SELV data, it became apparent that these stockouts were caused when there were delays in processing funds for per diems and fuel. With this information, logistics personnel can find new ways to ensure that issues like this don’t repeat themselves.

This tour of provinces was a way to fortify interest in SELV.  In Mozambique, SELV provides a clear picture of the vaccine supply chain, making it easy to see what is working and what needs improvement. Product data is analyzed regularly and this data is being used to make much needed changes. Staff in the provinces that currently use SELV spoke very highly of it, and the people I met all demonstrate a great commitment to improve the immunization supply chain, making me proud to provide them with the best tool possible.